RIOTS IN SOUTH AFRICA AFTER DEATH OF 16YEARS BOY

Today at around 1630hrs riots broke out in South Africa after a Police Officer killed a 16 Years old boy.

South African president Cyril Ramaphosa called for calm after the alleged police killing of a disabled teenager sparked protests and placed the spotlight back on the country’s record of police brutality.

Relatives of Nathaniel Julius, 16, who had Down’s syndrome, said that police shot him in the street and left him at a local hospital after he went out to buy food in Eldorado Park, part of Johannesburg’s Soweto township, on Wednesday.

Residents chanting “We want justice” clashed with police this week after they accused local officers of covering up the killing. Mr Ramaphosa said on Friday that Julius’s “tragic death has given rise to anger and unrest in a community that deserves better” as he called on residents to “work with our criminal justice system”.

South African independent police Ombudsman body said it was investigating the killing. “We won’t spare anybody, whoever has committed the crime will have to face the law,” Bheki Cele, the police minister, said on Friday.

“There is just a lack of accountability when it comes to police violence . . . there have been multiple incidents of police literally getting away with murder,” said Ziyanda Stuurman, who researches police violence and policing in South Africa. The police ombudsman was under-resourced, while the impact of violence on marginalised communities struggled to get attention, she added.

“This has everything to do with there being a distinct class and race element to police violence . . . the vast majority of incidents occur in poor black and coloured neighbourhoods,” Ms Stuurman said. The population of Eldorado Park is predominantly coloured, a term used in South Africa for groups of mixed-race ancestry.

The country’s pandemic lockdown, which is easing after signs of a peak in infections, has also been marred by violence by security forces who enforced strict rules such as the ban on sales of alcohol that has now ended.

David Makhura, the Mayor of Gauteng, the province that includes Soweto, said on Friday that Julius was caught in the crossfire of a shootout between police and gang members in the area. But family and community members have disputed this version of events and said that the police were seeking to cover up “cold-blooded murder”.

“They say he was caught in a crossfire because there was gang-related fights . . . there is nothing like that, there was no gangs,” Cyril Brown, Julius’s uncle, said.

On Thursday the police threatened to fire rubber bullets at journalists and detained them as officers suppressed protests over the killing. More demonstrations have been called for this weekend.

The opposition Economic Freedom Fighters said that Julius was killed by “a rogue, cruel thug in a police uniform” and demanded the prosecution of the officer responsible. This month marked the anniversary of the police massacre of 34 striking workers at the Marikana mine in 2012, widely seen as a turning point in its post-apartheid history although one where no officer has been found guilty.

Currently situation has calmed down but they people insist to continue with the demostrations against the injustice if nothing tangible is heard from the government side. 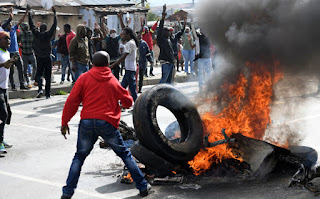