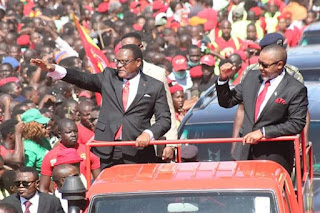 LC and SKC during campaign

It was in June when the Member of Parliament for Karonga Central Constituency died due to Convid-19 desease leaving the Area without a Parliamentarian. The late Parliamentarian Dr Cornelius Mwalwanda was voted to be the representative of the area in 2019 during the Tripitite Elections where later Presidential Elections were were nullified on 3 February, 2020 by the Constitutional Court of Malawi led by Justice Hilly Potani.
After the death of the MP now two main notable parties which are under Tonse Alliance Banner have shown interest in producing their candidatures.
The Malawi Congress Party to be represented by Mr Eliam Simwaka and UTM by Mr Frank Tumpale Mwenefumbo. 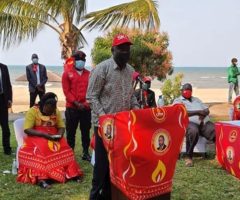 Both parties are preaching the good news about themselves despite that the government is run by the both of them (Tonse) as many people are left in puzzled.
Frank Mwenefumbo also contested in the same area in 2019 under Afford Umbrella where he did not make it.
Currently the campaigns are in progress distributing party regalias and also holding rallies despite the measures to fight against Convid-19 desease which were set by the same government.
So far the number of people infected with the Corona in Malawi is at 4,900 with 3 new deaths on 14 August, 2020.
Malawians are expecting to witness a dramatic turn as usually the president always go to campaign for their candidates. It will be the incumbent President Dr Lazarus M Chakwera campaigning for Simwaka and Dr Saulos K Chilima the vice president campaigning for Mwenefumbo.
The by-elections are expected to be held late this year of 2020.
Other parties being represented are UDF, DPP and AFORD.
1 comment
0
FacebookTwitterPinterestEmail

The battle of politicians, that's how it usually goes.