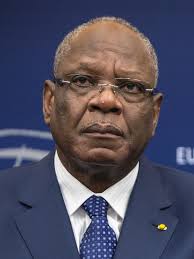 President Keita-Mali
On 18 August, 2020 President Keita of Mali and his Prime Minister have been captured and detained by Mali’s soldiers.
President Ibrahim Boubacar Keïta and PM Boubou Cissé are being held at a military camp near the capital Bamako.
Earlier, the mutinying soldiers took control of the Kati camp.
There has been anger among troops about pay and over a continuing conflict with jihadists – as well as widespread discontent with President Keita I’m the country.
Tuesday’s mutiny and arrests have sparked international condemnation.
The Economic Community of West African States (Ecowas), a regional block that has been mediating talks between President Keita and opposition groups, has called for the immediate release of all officials.
The mutiny was led by Colonel Malick Diaw – Deputy Head of the Kati Camp  and another Commander General Sadio Camara.
After taking over the camp, about 15km from Bamako the mutiners marched on the capital where they were cheered by crowds who had gathered to demand President Keita’s resignation.
In the afternoon they stormed his residence and arrested the president and his prime minister – who were both there.
The president’s son, the Speaker of the National Assembly, the foreign and finance ministers were reported to be among the other officials detained on the spot.
The number of soldiers taking part in the mutiny is not known as they are demanding for soldiers’ pay to increase.
Kati camp was also the focus of a mutiny in 2012 by soldiers angry at the inability of the senior commanders to stop jihadists and Tuareg rebels taking control of northern Mali.
African NationalsCivil WarsMali Soldiers
1 comment
0
FacebookTwitterPinterestEmail