The Government of Malawi today 12Augast, 2020 met the faith leaders
to discuss on the implementation of newly gazetted measures which are meant to fight against Convid-19 desease.

During the meeting it was noted that the government was rushed  in implenting the measures before making thorough consultations said the Health Minister Mrs. Khumbize Chiponda. 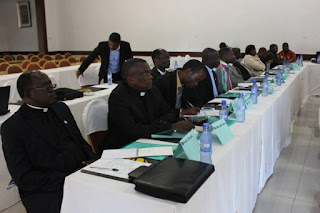 Leaders during the meeting

Later, it was agreed that the new laws should not be enforced instead they should be following the previous measures of gathering 100 people during prayers and funerals.

In her statement the minister said that the government has planned to reopen the Malawi’s Airports from Early days of the month of September, 2020.

In Malawi Corona Virus is now stabilizing as the number of those recovering everyday is growing than those still sick. Now it’s almost 3 days without experiencing any Convid-19 related deaths.

The total number of the confirmed cases is currently at 4, 800 including those already recoverd and the deaths.

LIFE OF PROFESSOR MUTHARIKA AFTER DEFEATED

It's sounds awesome. But life is precious let's take care of ourselves.